The Dragon Kingdoms game is a fascinating new Playtech entry into the online slot games arena. This five-by-four slots game has 30 pay lines and each line can be bet at $0.10, $.020, $0.50, $1, and $5, allowing bets to run the gamut from $0.10 to $150. The Dragon Kingdoms jackpot is 25,000 coins multiplied by the line bet, for a truly amazing jackpot possibility. This exciting bet spread and high value jackpot makes this game attractive for players at any budget level. 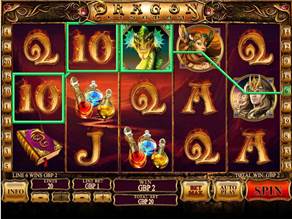 The Dragon Kingdoms slots game features vivid fantasy graphics of dragons, warriors, princesses, and treasures. The colorful graphics are augmented with exciting winning animations that are sure to please the most discerning game player.

During normal play, if the Dragon Kingdoms scatter symbol appears on reels two, three, and four, free games are awarded. These fifteen free games are at higher payouts, with multipliers of x2, x3, x4, or x5. After each winning spin during the bonus round, the multiplier increases by one. However, after each non-winning spin, the multiplier decreases by one. If the Dragon Kingdoms scatter symbol appears in columns two, three, and four during the bonus games, this retriggers the bonus and adds 15 more free spins. There are no limits to the number of times the bonus spins can be retriggered, creating the potential for infinite bonus games. Following the bonus game, players have a chance to win even more by wagering some or all of their winnings in a bonus card game.

Being a Real Gambler

To be a real gambler means to play smart, not just wasting money on some game. If you are going or already are a person, ready for winning at the slots games, you should know the basic rules and differences between the slots.

Also you need to know what the guide to slots but also be able to use it and apply to your game.